3 reasons Grattan got it wrong on solar 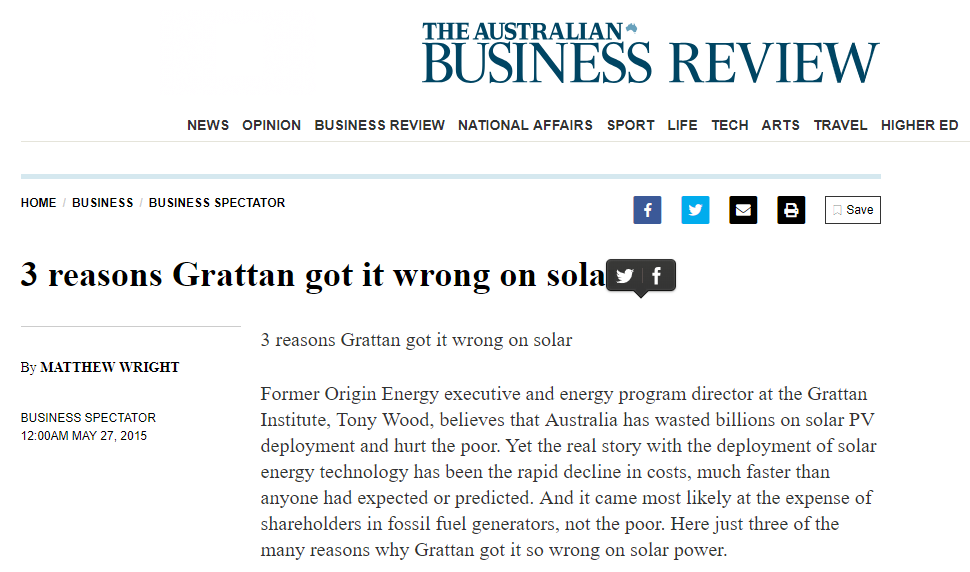 3 reasons Grattan got it wrong on solar
Former Origin Energy executive and energy program director at the Grattan Institute, Tony Wood, believes that Australia has wasted billions on solar PV deployment and hurt the poor. Yet the real story with the deployment of solar energy technology has been the rapid decline in costs, much faster than anyone had expected or predicted. And it came most likely at the expense of shareholders in fossil fuel generators, not the poor. Here just three of the many reasons why Grattan got it so wrong on solar power.

Wrong 1: The net cost of support for solar was nearly $10 billion … if we completely ignore the primary purpose of the support programs.

Wood says that the previous preferential federal and state solar programs have cost a net $9.7 billion to deliver only one social benefit to the community – 66 million tonnes of CO2 abatement achieved over an artificial 15-year period reflecting the period of the capital subsidy.  But as was covered by my colleague Tristan Edis yesterday, solar deployment has been crucial to bringing the cost of solar technology down so we could achieve future, far larger emission cuts with confidence the costs would be affordable. As was always the case with the state based feed-in-tariffs and the federal capital subsidy, direct CO2 abatement was only one of the objectives, the main objective being long-term cost reductions.

It’s therefore strange that Wood and others such as Bjorn Lomborg, whom Wood effectively parrots, fail to see the benefit from programs and incentives to encourage deployment. Both Wood and Lomborg believe in laboratory R&D achieving cost reductions. They believe that if you give public and private institutions money then they’ll work away and achieve cost reductions and efficiency gains in energy technologies such as solar, wind, carbon sequestration and clean coal. They believe that deep in the bowels of universities, in dimly lit rooms with no windows, scientists in white gowns and protective gear will experiment, do computer simulations and eventually produce products that can be commercialised and almost straight away compete in established markets.

So Wood and Lomborg’s failure is not being able to see that the greatest things have been achieved when work in the laboratory is coupled with retail markets, operating supply chains and involvement of equipment suppliers such as robotics and production line systems manufacturers. Once you get the entire supply chain operating and go through those machinations, entirely new streams of research and development are spawned as private companies that supply components get involved in the manufacture, research and development of complementary technologies. This then flows back to the old school R&D in the laboratory and the result is like compound interest.  Innovation also breeds innovation as imitators and new want-to-be disruptors arrive on the scene to try to take a piece of the real tangible operating market.

Today solar systems cost almost one-tenth of what they did when the first feed-in-tariffs in Australia were announced, and clearly programs initiated by governments in Australia, Germany, Italy, Spain, the US and China created this low-cost solar outcome.

In several markets in the world solar is now the cheapest way to get energy, bar none. And as every day passes and another subsidised or unsubsidised panel is installed – the next panel to be installed is cheaper. This is because as the demand for solar panels rises with every new panel installed, the factories scale and R&D scales continuing the downward cycle in cost.

Without the deployment in Australia (and other countries) that Wood keeps calling a waste, this would not be occurring. Any rational person could see the massive societal benefit of these reduced costs if they believed that we needed to avoid dangerous climate change.

The renewable energy target supporting small-scale solar technologies (as well hot water heat-pumps) was always a complementary measure that was about developing industry and getting costs down.

Wrong 2: The poor have suffered from solar’s rise

Wood’s paper repeatedly suggests that the solar subsidies have come at the expense of the poor, playing on people’s concerns about fairness. Yet in reality the cost is likely to have come at the expense of the shareholders in large electricity generators such as China Light and Power, GDF Suez, Mitsui and AGL. The other group bearing the brunt of the cost is likely to be the wealthy living in inner urban suburbs who don’t install solar systems and tend not to shop around among power retailers.

In a conservative University of Melbourne study (McConnell et al. 2013), the extra competition from the addition of solar systems was shown to deliver reductions in overall wholesale electricity costs that were  greater than the cost of funding the solar subsidies. This is because solar destroyed most high price events in the wholesale market by displacing expensive gas generators. As wholesale prices contribute considerably to retail power bills, this effect from solar being wedged into the market lowered everyone’s electricity bills. This has been confirmed time and time again by private energy market consultants including Roam and ACIL Allen.

Wood and his co-author David Blowers acknowledge this depressive market effect (called the merit-order effect) but then dismiss it as an unimportant wealth transfer. Yet this wealth transfer completely ameliorates any extra cost other power consumers need bare, including the poor as well as manufacturers. Wood and Blowers say this benefit has been entirely pocketed by power retailers and not the poor but where is their evidence? Analysts such as St Vincent de Paul indicate that poorer households tend to be highly price sensitive and prone to switch retailers for a better deal.

Also, today a large consuming household on a city suburban fringes or in rural areas that might otherwise face genuine financial stress from their power bill, can source a solar system for $1.00 per watt and pay that system off in as little as five years. This has injected greater competition into the power retail market to the benefit of places like Caroline Springs, not Toorak.

Wrong 3: We should have focused on large-scale utility solar, not rooftops.

According to Wood, utility-scale is far more efficient than installing systems on rooftops. But to come to that conclusion you’d have to be ignoring the facts. Right now a quality system can be purchased from Solargain for around $5500 – or $1.75 per watt – without the STC subsidy. An even cheaper system (that I personally wouldn’t buy but would probably would work fine all the same) can be purchased from the country’s biggest independent installer, TrueValue Solar, for $1.52 per watt with no subsidy. These costs are far, far cheaper than any utility-scale installation that has been built in Australia, or even in the US where labour costs are much lower. In the US, utility-scale installations comes in at $A2.20 per watt or a whopping 150% more expensive than the TrueValue Solar system. Utility-scale systems in Australia have to date cost even more than that at close to $3.00 per watt.

I recently installed a 25kW household system as a case study for my thesis at $1.60/W (unsubsidised price). There was a 15-day lead time in getting the installer to site and total time to install the system was four days. It was about as efficient as it gets as three men worked away for four days to get it installed. The interesting thing is that I would have paid the same if it was a much smaller 5kW system.

If, however, I tried to put a 101kW system on a farm near a transmission line or substation then I’d need to negotiate with Wood’s former employer Origin on their terms to agree to purchase my Renewable Energy Certificates and energy. I’d have to negotiate and pay special design fees to the distributor or transmission operator I wanted to connect into. I’d have to organise and pay for a dedicated connection to the grid, I’d have to lease or buy land, I’d have to go through planning approvals and consult neighbours. And then I’d need a team of lawyers to help me with negotiating this array of red tape. The inefficiencies of a large-scale photovoltaic solar plant just keep mounting up and yet there are millions of rooftops available with north, east, west and south facing roofs ready to be plastered in solar where none of these overheads exist, which Wood fails to see.

Plus, I get an option value from rooftop solar that I don’t get from utility-scale; because it is located right at the point of consumption it has greater ability to enhance households’ ability to offset network distribution costs by, either, load shifting into power generation periods or taking advantage of batteries coming down in price.