The 10 dumb myths of solar installers 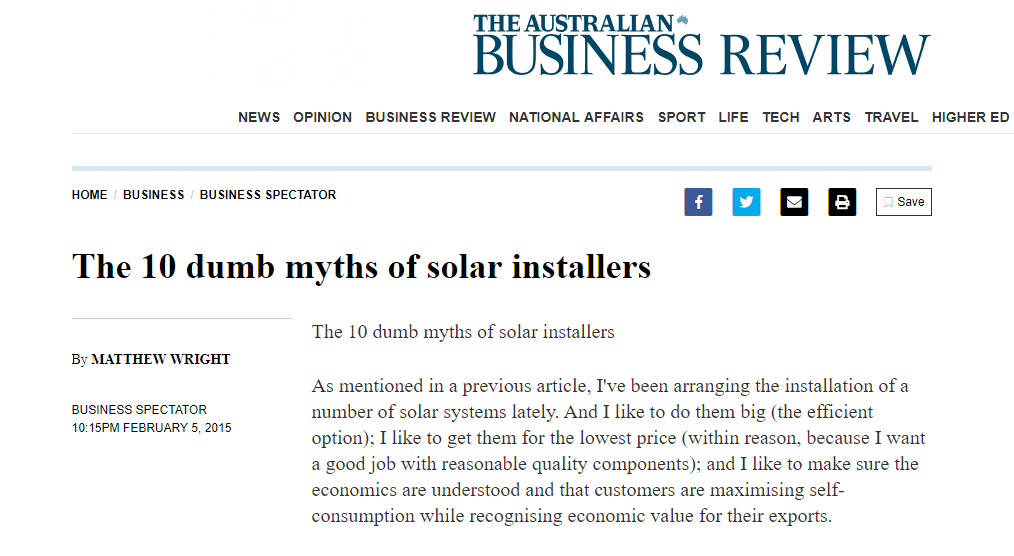 The 10 dumb myths of solar installers

As mentioned in a previous article, I've been arranging the installation of a number of solar systems lately. And I like to do them big (the efficient option); I like to get them for the lowest price (within reason, because I want a good job with reasonable quality components); and I like to make sure the economics are understood and that customers are maximising self-consumption while recognising economic value for their exports.

And most importantly to me, I really want the environmental outcomes that come with installing as much solar as possible, displacing both fossil gas burnt on-site and coal and gas-fired power generation from the grid.

In pursuing those aims, I've run up against a few myths I get from solar installers that, frankly, have me flummoxed.

I want to buy a product off them. I've worked out the solution and then I'm told, ‘no you can't’.

But in almost every instance –  with much hard work – I've managed to convince them it's just not true, got the system I wanted installed and, ultimately, proved the myth wrong.

Here's my list of the top 10 solar installer myths. It's not complete but it covers the main myths.

Now, I've heard of all these dodgy installs but haven't really come across too many. I know that in my case I haven't had anyone try to sell me a stupidly built solar system. My problem is the opposite: installers are foregoing revenue and profits because they won't sell me a perfectly good solar system even though I've modelled it up using the same software they use and I understand exactly how the production will pan out and can relate that to the demand profile of the customer (which I also know).

This one's a goody, installers vying to sell north-facing panels only. Fortunately, it's mostly been solved. With the self-consumption of solar generation paying three times more than exports, the light bulb has switched on that losing 10-15% of annual production to gain even more in self-consumption is worthwhile.

3) There must not be shading of the solar panels

OK, a system might experience some shading for some section of the day, say the afternoon – what’s the consequence? Some derating with reduced power output, but the system doesn’t blow up and isn’t damaged. If the shaded panels are facing north the derating could be as high as 15% and the amount of power output would still be as good as an unshaded west or east facing system which installers, for the most part, now thankfully happily sell.

Obviously if you can give a customer a good sized system while eliminating shading or minimising it, that is a first preference. But then again you don't want to plunk the panels lazily in the middle of the roof, which might crowd out the roof space so the customer can't add more panels in the future.

This one comes from our friends in the incumbent power business establishment and is rubbish. Systems should face any way that maximises production and benefits the customer. So if a customer isn't home in the evening, then western facing panels may not be of that much benefit in lowering their personal power bill via maximising self-consumption. Although I think west-facing panels are perfectly fine for most people, it's not a law that anyone should be following religiously.

If power distributors want to run around pushing this myth on the solar industry and customers alike they could offer additional feed-in-tariffs to encourage it. But they don't.

The power companies are just spreading FUD – fear, uncertainty and doubt – to make people feel like they’re doing something wrong or unfair as a result of their north or east facing systems. Yet these people have invested their own money to help fight climate change and contribute to reducing wholesale power prices to the benefit of other customers and to the detriment of polluting fossil fuel power stations. This is something to feel good about.

This one’s a biggy. I was previously in the trap also of criticising systems that were oriented south, southwest or southeast.

Actually they're great. They're great if the north, east and west already have panels, as they help enhance self-consumption of solar output. They're also great if installing on the northern roof is complicated and would necessitate a very expensive install. If you were comparing, say, a system on the north costing $1.30 or more per watt due to complications (split arrays, need for  DC optimisers/micro-inverters), but could get a system in for $1 per watt on the south, then the financials end up about the same and you could conceivably afford to install 30% more panels on the south that would make up for the loss of power output.

The south facing system is also a good match for self-consumption in summer. And in diffuse light (when it’s cloudy) it should contribute as much as a north facing panel. That’s assuming 5-30 degrees incline on the south facing roof in Melbourne. As you go further north from Melbourne, the option of installing on the south gives better and better results.

The myth here is that apart from Trina, Yingli and Suntech everything out of China is cumbersome, performs badly and will be up for warranty claims within a few years of being installed.

Let's remember that Chinese inverter manufacturer Growatt is the company that has the largest share of the Australian market when it comes to inverters. They had some issues in a prior run of inverters which got swapped out under warranty, as you should expect, yet everyone in the industry seems to be using that done and dusted story from the past as a model (but poor) case study of why Chinese inverters and other products are no good.

There's also a bit of irony in the rubbishing of all Chinese inverters because, as I've discovered, Growatt inverters for instance have better power monitoring than some of the leading brands with 5-minute interval data available showing the performance of the array or arrays attached to each individual MPPT (this stands for maximum power point tracking – it is essentially the computer smarts of the inverter which optimises the power output from a group of panels given varying sun conditions). Some well-known German brand inverters can't give you monitoring of each of your arrays though their manufacturers have promised it's coming .... so is Christmas.

Let’s be straight – it's better economics to oversize the amount of panel capacity relative to the inverter (see Reasons to supersize your solar for why this is the case). All systems should be oversizing 150% panel capacity to inverter output. Unfortunately the Clean Energy Council (CEC) guidelines undermine good solar system economics. They currently only allow 133% oversizing of arrays, after which you forgo eligibility for the government STC rebate.

However provided you are prepared to do the project in two passes, claiming the STC rebate only for that capacity up to 133% of the inverter capacity, this is entirely legitimate. Most importantly it can be done safely and within electrical codes and regulations.

Yet what’s even more ridiculous is that many installers come up with arbitrary constraints that they’ll only do 15% oversizing on the north. Others even incorrectly claim that you're not allowed to oversize and it wouldn't get past the electrical inspector/authorities.

Oversizing changes production over the day from a bell curve to a table top (much like an intermediate power station) which is better for solar owners by maximising self-consumption, but also customers without panels and the network operators.

Wrong again for most network distributors. Yes, Ausnet in Victoria has this stupid rule and they should hire some electrical engineers with competence to help them out. But Citipower/Powercor, Jemena and United Energy in Victoria all allow oversizing as do network operators in WA, SA, Queensland as well as some distributors in NSW.

So if distributor Jemena says you can have a 10kW capacity inverter installed on a single-phase then as long as it's compliant with Australian Standard 4777 you can attach panels with capacity of 13kW, 15kW or even more. Also by not going beyond a 10kW inverter you slip in under their rule of automatic pre-approval

No, this is old thinking. Adding the cost of 20 or 30 cents per watt to a system that costs $1.00 per watt so the the panels are ideally tilted to eek out every bit of output from a panel is a complete waste of money. With the exception of completely flat roofs where build-up of dirt and grime will be a real problem, flat racking is the go. If space permits, you could instead install 30% more panels for the same price as using tilt framing. Better to install more panels than frame – because that creates economies of scale and brings the cost of panels down in the future!

Yes it can be done. Sure there is a loss of output (in technical speech, a cosine loss leading to voltage mismatch dynamics because of different MPPs within the series strings) but this must be balanced against other benefits in, say, reduced installation cost and the ability to fit more panels on a roof. The CEC guidelines say a maximum of a 5% difference in inclination, yet most installers won't even do that. In reality the guideline should be scrapped or increased to a higher figure more like 15%, as long as the consequences are understood and explained to the customer and the economics of a larger system outweigh any losses per capacity invested.

By burying these myths, Australians will be able to buy a lot more solar panels, benefiting from economies of scale and availability of roof space. Electricians on the other hand who get on board can make a healthy living helping Australians realise their dream of more solar panels; the environment benefits, the nation's grids don't have to max out close to their peaks anymore and customers will be ready for their next purchase of energy efficiency, more solar and batteries.

Myths aren't good for solar, good for customers or good for installers – so let’s bust and bury them.