Sunpower’s leading residential format panel is now 400W with its new Maxeon G3 range.  The main technological advance is in the production which it says is as much as 50% cheaper than its old method of getting cells out the door with world leading efficiency.  There are some other benefits too including a 20% reduction in temperature derating due to heat.

Previously, It had appeared at the surface that competitor LG had almost usurped and surpassed Sunpower. When Sunpower was offering a 360W panel and LG were offering the same rating a their leading option in the market,  but when you delved deeper you would find that LG had pulled a fast one.

And being tricked is what’s happened to thousands of Australian’s looking for a top notch leading solar system who got LG thinking it was the most efficient in the market.

If you can’t join them beat them….

Sunpower has now redone their panel formats (sizes) so they’re pretty much in-line with LG’s larger format panels. So now customers once again (until/if LG pulls another trick) will get an apple for apple comparison.

Once the new Maxeon 3 panels arrive in the next 1-2 months, An LG 360W panel will be rated lower and less efficient than Sunpower’s entry level 370W offering which share a similar format.  The Sunpower leading panel will be at 400W.

Solar is all about innovation and breaking the limits.  Just 5 years ago it was common in a standard format commodity priced residential panel to only be rated at 250W of output.

Today commodity priced panels are edging towards 330W a 33% increase in output.   This means that there is 25% less work to do on the roof for the same desired output or as the trend has it we are able to put 33% more panels down when we do a new install on the roof resulting in systems that are 33% or more larger. 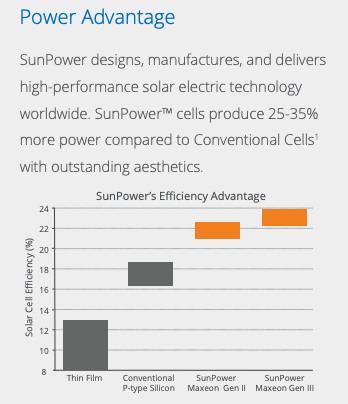 Commodity panels will continue to catch up with Sunpower’s best

So if you can imagine in the future (could be 4-8 years) commodity panels will be where Sunpower’s panels are today at 400W and when commodity priced panels are at 400W we will be able to put down 50- 60% more solar for the same labour and racking costs saving on rooftop real estate than 250W panels of yesteryear.

Soon (in the next 4-8 years Sunpower will hit the near limit of efficiency developments and the next shift will have to be to multilayer – that’s a really big jump so before that time we’ll most likely see commodity priced panels doing catchup as the next big thing.

Efficiency is a very interesting space representing technology and Sunpower is clearly the winner and has generally been the winner for the last quarter of a century.  LG tried a trick and Sunpower have reacted leaving them obviously way behind.

2000km a day on your home solar now reality in Australia's leafy suburbs
Solar power energy payback getting better all the time.
ACT achieves serious milestone - The 5 stages of transitioning to a 100% renewable energy nirvana
How long do heat pumps last?
How much rooftop solar do you need to power a Tesla model 3 ?