The complete solar roof is making a big return

BIPV was a buzzword that kept on buzzing while the solar industry was in its early days and solar was something that most of us had only ever seen on TV or at a technology park.

At the time there were countless articles about how solar was going to replace building materials in what is known as Building Integrated Photovoltaics, or BIPV. Academics were excited about it and papers were getting published in academic journals and conference proceedings. They even bothered to do the economics on the technology (which proved time and time again that it was mightily expensive).

The few heavily subsidised BIPV arrays that were installed, such as at CSIRO's Newcastle solar research facility, used very low efficiency dyes built into a sandwich of glass. They looked good as an architectural feature with glistening light refracting in different colours onto the lobby below. But from a cost and energy production perspective, they were a big fail. 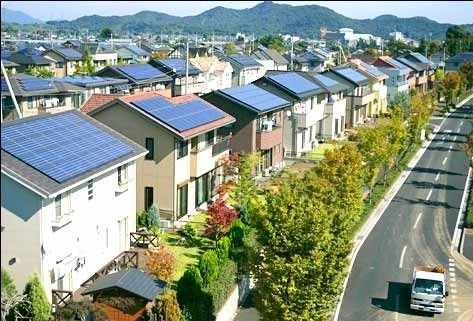 When the solar industry hit it big time (about seven years ago) we didn't really hear much more about BIPV, the novelty being lost among the excitement of gigawatt production lines and ever more records in efficiency and cost reductions.

Fast forward to today, rooftop panels for homes are on their way to 25%, 30%, even 40% efficiency (with multi-layering) over the coming decade so architectural "fun" BIPV, at 7% efficiency, isn't going to cut it when that's where the competition is at.

Due to cost reductions and the need for electricity production in the coldest and cloudiest weather to run heating, north, south, east and west facing (in fact, any direction) roof panels will be economical.

If we think of an average new house at about 250 square metres built double storey, there's about 150 sq m of rooftop available including the garage. That could be covered in about 80-90 panels, not including in-fill panels which may or may not include photovoltaic material. Today, commodity 250W panels could be sourced for $200 but in a few years this cost will likely drop by half and the panels themselves will have higher ratings. So with a cost reduction like this you could envisage $10,000 worth of panels being installed on the roof and the labour that would otherwise go to laying tiles or plumbing (yes, it's stupid you need a plumber in some states to put simple corrugated sheets down with an impact driver drill and self tapping screws – nothing but protectionism and favouritism for a trade) would now go to laying solar panels.

The solar installation companies in this instance would have to start merging with roofing companies as regular roofing labourers would need to put the roof down and electricians would need to come into the roof (as we now have panels that replace the roof) and wire them up.

So look out for it, at some point the roofers and solar installers will get together and the volume builders will flip to universally installing solar roofs. We'll likely see solar roofs pop up as examples first on architecturally designed one-off houses and then they'll flow into the mainstream displacing all other roof types.

And as a side note – I'll be glad to see the last of tile roofs, they're expensive, inefficient and heavy. Houses move and all the cement that locks them together cracks – they'd be better called 'rubble roofs'. Solar will save us from the scourge of rubble roofs in our suburbs!